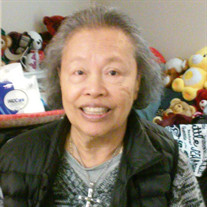 Teresa B. Sheats, 79, passed away peacefully in Moses Lake, WA. on December 24, 2017. She was born January 6, 1938 in Cebu, Philippines to Enarciso and Maria(Postrano) Baclayon. Teresa was married for 51 years to Stephen C. Sheats who preceded her in death on August 5, 2014. They wed on May 26, 1963 in Cavite City, Philippines. Teresa and Stephen met while he was stationed in the Philippines during his tenure in the United States Navy. After moving to the United States, Teresa focused on raising her three daughters and became a US citizen on August 23, 1968. Education was extremely important to Teresa, as she had limited education in the Philippines. It was imperative for her that her daughters received an excellent education. She will be remembered as saying: “Once you have that education, no one can take it away from you.” Teresa’s hobbies included: reading, dancing, sewing, gardening outside and cooking Filipino food. Teresa loved playing games like Bingo, Mahjong and Sungkaan, also known to her family as the shell game. She also loved to watch game shows with her favorite being The Price Is Right. Teresa is survived by her children Stephanie (Thomas) Marsolek, Maria (Jon) Lugar, and Taryn (Dwight) Sanders-Sheats; grandchildren Stephen Lugar (Kasi), Jema (Jackson) Marsolek John-Maire, Daniel Marsolek, Evan Marsolek and Jaelyn Lugar; and great-granddaughter, Athena John-Maire. She is also survived by her family in the Philippines. Her sister Filomena (also known as Minay), sister Juanita B. Manalon with nieces and nephews, Rowena Abesada, Meriam, Maria Fe, Ronald and Romeo: and her youngest sibling, her brother Cesar Baclayon with nieces and nephews Elna, Eleazar, Evangeline, Ellenmae, Emyzell, Emily, Naive and Shamarah. Teresa’s Funeral service will be held at Rill Chapel in Port Orchard at 2:00 pm on Thursday January 4, 2018 with visitation a half hour before the service. Burial will follow at Sunset Lane Memorial Park, also in Port Orchard. Teresa will be greatly missed by those who knew and loved her.

Teresa B. Sheats, 79, passed away peacefully in Moses Lake, WA. on December 24, 2017. She was born January 6, 1938 in Cebu, Philippines to Enarciso and Maria(Postrano) Baclayon. Teresa was married for 51 years to Stephen C. Sheats who preceded... View Obituary & Service Information

The family of Teresa Baclayon Sheats created this Life Tributes page to make it easy to share your memories.