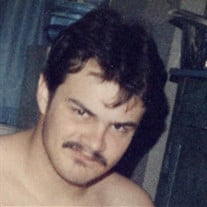 Thad Mitchell Wilder beloved husband, father “pop”, son, brother, Papa, uncle, and friend to many passed away on Tuesday, May 8, 2018. Thad was born on December 2, 1963, in Lancaster, Ca. He graduated from Helix High School, San Diego, Ca. Thad enlisted in the Navy in 1981 and served in Operation Desert Storm as an Aviation Electrician on the U.S.S. Nimitz. After serving nearly twelve years in the military Thad completed his A.A. degree in mechanics and spent the better part of his life using his mechanical skills to repair vehicles and machines alike. Thad had a love for collecting a variety of interests such as comics, coins, and movies and was never known to refuse a friend a meal or shelter. He is survived by his wife, Kari Krum, his mother and step-father, Linda and Paul Bragg, his father, Richard Leon Wilder, his children: Corey Krum, Thad “TJ.” Wilder and spouse, Elizabeth Wilder and spouse, Tressa Wilder, Brianna Mappus-Ferguson, and Thomas Mappus-Ferguson, his five grandchildren, and his sisters and their spouses, Heather and Don Hundoble, and Rebecca and Peggy Michelotti, his brother, Daniel Wilder, nieces/nephews and his best friend Aaron. He is preceded in death by two brothers, Mark Carlton, Ryan Michelotti, beloved Aunt, Joanne Mellinger West, and grandparents.

The family of Thad Mitchell Wilder created this Life Tributes page to make it easy to share your memories.