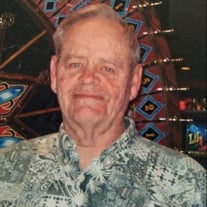 Thomas A. Furniss was born March 4, 1939 in Electric City, Washington to Alfred and Delores (Schroder) Furniss. In 1944 the family relocated to Tacoma, Washington where he Spent his childhood years. In 1957 he enlisted in the US Navy at the age of 17. While home on leave Thomas met the love of his life, Diane M. Peppin. One year later in August 1959 they were married and enjoyed 61 years together. He truly cherished his wife Diane. Thomas had a very accomplished career. He started out in the Navy as a Interior Communications Specialist. Followed by an 8-year enlistment in the Airforce. 1969 Thomas began working at PSNS as an Electrician. This is where he had his first experience in Quality Assurance/Control. After completing specialized Inspection training, Thomas began conducting shipboard and other Inspections. Education was very important to Thomas. During the years he was employed at PSNS he was also a full time student. 1977 Thomas earned his Bachelor of Science in Administration and in 1979 his Master’s in Business in Administration. He was also an Ordained Minister, Quality Control Engineer and finished with a PhD in counseling. In 1980-83 Thomas moved the family to Yokosuka, Japan where he accepted an employment opportunity. This was without a doubt the highlight of his career, and personally some of his favorite years. He fell in love with the culture, the people and the country. He even climbed Mt. Fuji. His family was forever grateful for the experience. Returning to the United States Thomas held positions in Idaho Falls, Idaho and in Las Vegas, Nevada. Thomas retired in 1994 at the time he was an Quality Control Engineer, specializing in Nuclear Energy, GS-16. Some of the club memberships Thomas held were; Toastmasters Association, American Society for Quality Control senior member, MENSA (IQ 176), American Legion, Fraternal Order of Eagles, Veterans of Foreign Wars, Veterans for Peace and City College Alumni. Thomas was a dedicated father. He was always there for them and ready to listen when they needed an ear. He gave good solid advice and he fixed many of their problems. He always did his best to protect them from the (sometimes harsh) world. He stood by them always. Through his example he taught them morals, decency, integrity, values and how to love and forgive. He was exceptional in every sense of the word. Some of Thomas’ favorite things to do with his family when his kids were younger were hiking, fishing, camping, hunting with his son, target practice and as they became adults attending his grandkids little league baseball games, gardening, cooking. He loved family get-togethers, spending time at Pacific Beach, renovating the lake house, reading books, writing letters, and telling corny jokes. Thomas believed in meditation and it was part of his daily routine. Most of all he loved spending time with his dear wife Diane. Thomas passed away Saturday, May 1, 2021 at home surrounded by loved ones at the age of 82. He meant everything to his family. He is deeply missed. Thomas was preceded in death by his first born child Christine Ann and grandson Joshua Thomas Comerford. He is survived by his dear wife Diane, his three children Kathleen, LaDonna (Jim Mow), James (Sabrina), his grandchildren Nicholas, Jacob Comerford, Brian Bragg, Victoria, Thomas James and Maximillion Carlton, honorary daughter Valerie, several step-grandchildren and his cat Billy.

Thomas A. Furniss was born March 4, 1939 in Electric City, Washington to Alfred and Delores (Schroder) Furniss. In 1944 the family relocated to Tacoma, Washington where he Spent his childhood years. In 1957 he enlisted in the US Navy at the... View Obituary & Service Information

The family of Thomas A. Furniss created this Life Tributes page to make it easy to share your memories.