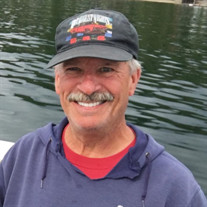 Thomas W Howlett III of Port Orchard, WA passed away peacefully in his home on July 4th at the age of 68. Tom was born to Thomas and Doris Howlett in Allentown, PA. He is survived by his mother Doris, Sister Sue, Children Kim, Tom, Troy and Todd, as well as his grandchildren Auston, Lilly, Bailey and Lyla. At a young age Tom grew a strong passion for muscle cars and spent most of his teenage years tuning, polishing and racing them with his close friends and family. At the age of 19, he decided to put that passion aside temporarily and serve our country in the US Navy. Tom served active duty for four years, where he spent much of that time in the Vietnam war abroad a US Naval river boat. During his service he received a National Defense Service Medal, a Vietnam Service Medal with 2 Bronze Stars and an RVN Campaign Medal with Device. At the end of his active duty in Long Beach, CA, he met and married Constance Hillis to whom he fathered his 4 children with. After honorably leaving active service, Tom continued his knowledge of ship’s maintenance and hired on with a shipyard in Long Beach, CA. In the late 1970’s Tom moved his family to Washington to work for a shipyard in Seattle. Shortly after moving to Washington, he continued his service to the Navy at Puget Sound Naval Shipyard. While employed at PSNS, Tom exceled with his mechanical and leadership skills. Tom dedicated 35 years, 2 months and 25 days of total service to the US Navy before retiring in January 2006. Tom enjoyed his retirement in Port Orchard, WA amongst his girlfriend Tina, close friends, family and extended family. He continued his passion for muscle cars by restoring several during his life. Tom enjoyed working on his muscle cars, as well as driving them all over the country with friends and family to car shows and cruises. When Tom was not turning a wrench or pushing the gas pedal on his muscle cars, he enjoyed fishing, crabbing, shrimping, casinos, restoring automobile memorabilia, motorcycles, and most of all time with his family. Tom has a heart of gold and has always been there to help anyone in need. Tom had an aura to brighten up any mood of the people around him and a contagious smile everyone would contract. Tom has left a positively lasting impression on everyone he has touched in one way or another. His wisdom, jokes and friendship will never be forgotten and he will always hold a place in our hearts as well as our memories and thoughts.

Thomas W Howlett III of Port Orchard, WA passed away peacefully in his home on July 4th at the age of 68. Tom was born to Thomas and Doris Howlett in Allentown, PA. He is survived by his mother Doris, Sister Sue, Children Kim, Tom, Troy and... View Obituary & Service Information

The family of Thomas William Howlett III created this Life Tributes page to make it easy to share your memories.