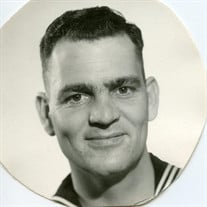 Tom was born on April 6, 1935 in Fayetteville, Arkansas to Shelly and Lillie (Blankenship) Magness. He attended schools in Fayetteville and afterwards joined the United States Navy, serving for more than 20 years and was honorably discharged as Chief Boatswain’s Mate. At some point early in his career, he met and married his wife Bonnie and they were together for 56 years. His Navy career was fairly interesting serving aboard different class ships, and traveling to many different ports throughout the world. He learned to handle small vessels such as liberty boats which likely made him a lot of friends. He also had to know how to operate cranes and large cable transfer rigs to transfer supplies across from another ship while traveling at about 15 knots. If you did not know what you were doing or made a mistake, people could get seriously injured. He would also stand watch at sea as a helmsman and other various duties. Growing up for his era was significantly different than that of this modern age. Young people now face such problems as bad internet connections and dropping calls because of their cell phone service. For him and his peers there was no such thing as television, internet, microwave, or cell phones. Running water meant how fast you could carry a bucket in some homes, not every home had a telephone and many that did had party lines and that is not where you stood on Friday night waiting to get in to the hottest entertainment. Radio was a huge part of a families entertainment and you actually knew how to talk to people as a rule because texting and email were not even on the chalkboard yet. For those reasons, it was interesting for him to listen to some of the complaints of the younger generations. After his retirement from the Navy, he went to work at Puget Sound Naval Shipyard for a while, but soon transferred to the Naval Supply Center where he operated cranes for moving supplies. Among some of his hobbies were of course macramé, but he also truly enjoyed gardening and yard work especially in his retirement. He also enjoyed watching baseball games, especially the Mariners. Late in the evening of July 21st Tommy set sail one last time crossing the bar for the final port. He will be greatly missed by all those who knew and loved him.

Tom was born on April 6, 1935 in Fayetteville, Arkansas to Shelly and Lillie (Blankenship) Magness. He attended schools in Fayetteville and afterwards joined the United States Navy, serving for more than 20 years and was honorably discharged... View Obituary & Service Information

The family of Tommy Ray Magness created this Life Tributes page to make it easy to share your memories.