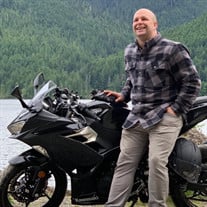 It is with immense sorrow we announce the passing of Trevor David Sauers born July 26, 1990 in Dallas, TX. He departed this world on July 3, 2020 in Silverdale, WA. He grew up in Dallas and Garland, TX where he forged hundreds of lifelong friendships , where his home had an open door policy, “the refrigerator open door policy,” if you want it get it, we don’t wait on you here.” Make yourself at home and all his friends did just that, his house was one of the neighborhood hangouts. He graduated from Lakeview Centennial High School May 31, 2008. Trevor loved just about every outdoor activity known to man and went from skate boarding with the gang through the neighborhood as a kid to being an avid snowboarder. He loved the cold weather and snow. Trevor never met a stranger, if you were one, you were not one for long. He was a warm, kind, generous, caring, clever, witty, loyal, fun loving young man. Kind of a ” McGuyver type guy” who can fix a submarine part with a paperclip, which he actually did. He had hundreds of friends all over the world from his stations in the Navy. He began his Naval career in November 2008 after graduating Base camp in Chicago, IL. After graduation he was assigned to the nuclear submarine the USS Oklahoma City # 723 stationed in Guam, where he traveled the world. After a small stint in San Diego, CA, he was then assigned as an ETR at Tinker Air Force Base in Oklahoma City, OK in 2014 where he served until 2017. He was assigned to the USS Pennsylvania nuclear submarine at Bremerton Naval Base, Seattle, WA as Petty Officer First Class, Electronics Technician Radars (ETR) in May 2017 until July of 2020. Always the professional, he took immense pride in his work and service to our nation. Trevor did live his dreams, he was exactly where he wanted to be, doing exactly want he had planned to do, Trevor had the world by the tail and wanted “you” to come along with him. He is sorely missed and deeply loved by all who were blessed to know him. He is survived by his parents Stanley D. Sauers, MN and Jenny Moore-Sauers of Dallas, TX; Grandmother Jean Sauers, of MN; Uncle and Aunt Kim & Kelly Babekuhl-Keithahn and cousins: Aaron R. Heiner, Ben Babekuhl , Evan M. Babekuhl of MN; Aunts and Uncles: Marilyn Dombrowski & 4 cousins, Chicago, IL; Sharon and Norman Konkol and 2 cousins in Amherst Junction, WI; Steven and Ester Moore & 2 cousins, Groves, TX; Brian and Sherra Moore & 6 cousins, of Port Neches, TX; Nancy & TK Farmer, of Jasper, TX and best friends Donavan Jackson and Rebecca McGee of Silverdale, WA and significant partner, Ms. Autumn Dixon of Shelton, WA. In observance of Trevor’s final request, his last voyage will be his burial at sea from the USS Pennsylvania. There is a Farewell Gathering and time for sharing stories at Rill's Life Tribute Center on Saturday, July 25, 2020 from 2:00 to 4:00 pm.

It is with immense sorrow we announce the passing of Trevor David Sauers born July 26, 1990 in Dallas, TX. He departed this world on July 3, 2020 in Silverdale, WA. He grew up in Dallas and Garland, TX where he forged hundreds of lifelong... View Obituary & Service Information

The family of Trevor David Sauers created this Life Tributes page to make it easy to share your memories.

It is with immense sorrow we announce the passing of Trevor David...