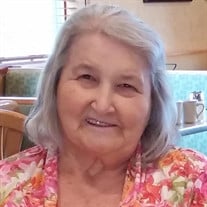 Viola Arlene Vinson was born to parents, Forrest and Hilda Davis, in Hermiston OR on October 13, 1935. When Arlene was about 4 years old, her baby sister, Deana, became quite ill with pneumonia. As she lay in her bed, sick and tired, she suddenly lifted her arms, eyes bright and smile wide, and called out “I’m coming” before resting her head back on her pillow and passing away quietly. The faith of her baby sister and her sight of the angels before passing, changed the course of the Davis family’s lives. They began to attend church, parents and children learned to love the Lord and became saved…and that was something that Arlene never turned from in all of her years. Passing on her love of God to her children and their children and anyone who cared to listen to her…and some who didn’t think they did…at first. A loving sister, wife, mother, grandmother, aunt, mother in law, great grandmother and friend; there were three things you could always count on…her unswerving faith and love of God and family, her tendency to sing anywhere at anytime (even if it was only an answer to a question), and her desire to feed everyone who came to the house. Her brother, Wes, recalls that she never failed, in over 70 yrs, to send him a birthday card, because the little things were important to her. And I’m sure others could and would say the same thing. Arlene married James Vinson in 1952 and they proceeded to have four children and start a realty business, Vinson & Vinson, which they ran out of their home, first at the beach in Manchester and then at the farm in Olalla. She stayed busy with her family, the business, the farm and her church. Her grandchildren were the light in her eyes and she never failed to have the ingredients ready for a batch of cookies when they came to visit. Cooking with grandma was a special time of laughter and song. Even after her move to Retsil and after her memory began to fade, her love of her family and her faith never waivered. Her daughter recalls a day, earlier in the year, when she went to visit and found her mother dressed to the nines, hair done and shiny, sitting outside her room. When she asked her who she was all done up for, Arlene beamed at her and said “Jesus. I’ve told Him that I’m ready and I’m waiting for Him to come take me home.” There is sorrow at the loss of this amazing woman…but there is rejoicing and celebration knowing that she was ready and is filling the heavens with joyful song. Arlene is survived by her sons, James Vinson (Rita) and John Vinson and her daughter, Armenda (Vinson) Mandeville. Her granddaughters, Deahanna (Mandeville) Hernandez (Eric), Lacey (Vinson) Dvorak (James), Anna Vinson, Alissa (Vinson) Key (Jon) and her grandson, David Vinson. She is also survived by her siblings, brothers, Wes and Russ Davis and her sister Connie (Davis) Hershey and her four great-grandchildren, Michael, Rafael, and Daniel Hernandez and Vivian Dvorak. Arlene was predeceased by her sister Deanna, her parents Forrest and Hilda, her husband Jim, her daughter Viola and most recently, her son in law, Brad. May the reunion in Heaven be joyous…we’ll meet you again someday!

Viola Arlene Vinson was born to parents, Forrest and Hilda Davis, in Hermiston OR on October 13, 1935. When Arlene was about 4 years old, her baby sister, Deana, became quite ill with pneumonia. As she lay in her bed, sick and tired, she suddenly... View Obituary & Service Information

The family of Viola Arlene Vinson created this Life Tributes page to make it easy to share your memories.