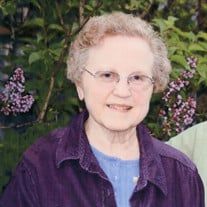 Virginia Mae (Justesen) Williams was born January 1, 1928 in Port Arthur (now Thunder Bay), Ontario, Canada to Peter Justesen and Helen Frances Emma (Lammar) Justesen. Virginia was the third of five children: Neal, Patricia, Virginia, Lois, and Jerry. Virginia attended grade school and high school in Port Arthur, Ontario and after graduating high school came to the United States so she could attend Walla Walla University (Walla Walla College) in the State of Washington from 1947 to 1951. Virginia obtained her BA degree in Elementary Education in 1951 from Walla Walla (College) University. Her teaching career spanned from1951 through 1986 when she retired. Most of those teaching years were spent teaching fourth or fifth grade. After teaching full time for all of those years, she retired and began volunteering at Elmira Elementary School (the school she taught at for about 24 years) in Elmira, Oregon and at the Emerald Seventh-day Adventist Community Center in Eugene, Oregon Virginia married Ivan Ralph Williams on June 17, 1951 a week after her graduation from college. Virginia and Ralph had three children: Wanda (Williams) Vliet, Daniel, and Debra (Williams) Clark. Ralph preceded her in death in December of 1977. Virginia had two grandchildren who were the love of her life, Portia (Vliet) Gregg and Candi (Vliet) Laskee. Virginia loved flowers. Her favorite flowers were carnations, but she grew any different types of flowers at her home in Veneta, Oregon. Tulips, daffodils, crocuses, dahlias, roses, and irises were some of the flowers she that she loved to grow. She took so much delight in growing and giving her flowers away that the neighbors called her the “flower lady”. Virginia was a very self-sacrificing person so that her children could experience the finer aspects of life. Virginia often went without so that her children could experience a good education, have music lessons, and enjoy cultural events at the University of Oregon. But after retirement, Virginia was able to splurge on herself finally and she loved to collect beautiful items: Avon flower dishes and glassware, spoons, teddy bears, stamps, coins, and Christmas ornaments. In 2011 she moved to Port Orchard, Washington to be closer to her daughter, Wanda. She became a member of the Port Orchard Seventh-day Adventist Church there. Virginia loved her church and spent years donating her time and efforts to the Dorcas Society in the Eugene, Oregon Seventh-day Adventist Church. She had a deep abiding love for her Heavenly Father and His Word, the Bible. Virginia looked forward to the ‘heavenly kingdom whose builder and maker is God”. She had hope for the resurrection and passed peacefully to her Maker on September 15, 2019 with that Hope. She was preceded in death by her parents, her two brothers, Neal and Jerry, her sister Patricia and her husband Ralph. She is survived by her sister Lois Serafin of Eugene, OR; brother-in-law Marvin Wangsnes of Grand Forks, ND; daughters Wanda Vliet (Darrel) of Port Orchard and Debra Clark (Wesely) of Beaver Creek, OR; son Daniel Williams (Debbie) of Walla Walla, WA; and granddaughters Portia Vliet-Gregg (Jason) of Kenmore,WA, and Candi Laskee (Shea) of Louisville,KY.

The family of Virginia Mae Williams created this Life Tributes page to make it easy to share your memories.