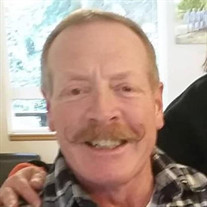 The Ashby Family lost a husband, son, father, and grandfather with the unexpected passing of Bill Ashby on Saturday, March 14th, 2020. His humor, wit, and personality will be missed by all those who knew him. He was a man who always had a joke for the occasion and would treat strangers as if they were old friends. In short, he was a man that always made the occasion brighter and funnier. Bill was born on October 30th, 1958 to Myrna and Butch Ashby. He and his two brothers, Bob and Brad, grew up on the family farm in Port Orchard, WA. He graduated from South Kitsap High School in 1976, and during that time he met his former spouse Susan Sample. They had two children, Chad and Emilee. He met his wife Mary at work and she instantly became part of the family. They married in Maui in 2014. He is survived by his wife Mary, father (William Sr.), brother (Bob), two children, and two grandchildren (Grace, Micah). He was preceded in death by his brother Brad (1983) and Mother Myrna (2016). Bill hired into Puget Sound Naval Shipyard after high school and completed an Apprenticeship in the Machine Shop (Shop 31). He transferred to the Code 740 Rigger Shop in 1993 and retired in 2014 as a Supervisor after 35+ years of service. His former coworkers remember him as a hardworking leader and mentor that always made people laugh. Several PSNS Riggers have noted "He's the best boss I ever worked for." Kitsap County was still wild when Bill was growing up in the 1960s and 70s. He and his brothers would ride dirt bikes all over South Kitsap and Olalla, before the housing developments and roads blocked the old trails leading wherever they wanted to go. Bill was a varsity wrestler in high school. He enjoyed hunting, fishing, and exploring the roads and trails at the family cabin in Aeneas Valley, WA. He and Mary would spend a lot of time together on the family farm and traveled to California, Arizona, and Hawaii. He sacrificed a lot as a father, working hard to provide for his two children. He coached them in soccer and baseball growing up and supported them through college. He always took time to spend with his children. Bill was all a kid could ask for as a parent. Given the current Coronavirus situation, the family has chosen to delay his celebration of life. The Ashbys will invite family, friends, and former coworkers to celebrate Bill's life at the annual Pig Roast at the Ashby Farm in Port Orchard. The celebration is planned for Saturday, July 4th, 2020.

The Ashby Family lost a husband, son, father, and grandfather with the unexpected passing of Bill Ashby on Saturday, March 14th, 2020. His humor, wit, and personality will be missed by all those who knew him. He was a man who always had a joke... View Obituary & Service Information

The family of William Dean Ashby Jr. created this Life Tributes page to make it easy to share your memories.

The Ashby Family lost a husband, son, father, and grandfather...