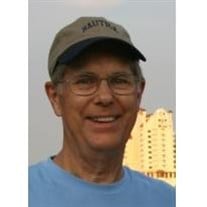 William C. Baker, Jr., age 83, passed away October 6, 2018. Bill was born February 21, 1935, in Portland, Oregon, to Viola and William Clyde Baker. He graduated from Lincoln High School in 1952 and the University of Oregon in 1956, with a degree in Accounting. In 1956, Bill married Susan Benedict, deceased, and they had a daughter, Debbie O'Brien. In 1967 Bill married Sandy Arnold, and they had two sons, Mike and Jeff. Bill worked until retirement mostly in the home building business in various financial positions, both in Southern California and in the Bay Area in Northern California. Bill and Sandy lived in Irvine, CA, when they were married, and after a number of years moved to San Jose, CA. They returned to Laguna Niguel, CA, for a brief time and then moved to San Ramon, CA. In 1999 when Bill retired, they moved to Port Orchard. Bill was a member of Bremerton Yacht Club, Phi Kappa Sigma Fraternity, Southern Pacific Historical and Technical Society, and SP&S Historical Society. Bill's main hobby was model railroading, and he built an extensive model railroad layout in his basement and enjoyed getting together with his model railroad friends. Bill leaves behind his beloved wife of fifty one years and one daughter Debbie (Bob) and her family, of Moncks Corner, SC; oldest son Mike (Cheryl) and their family, of Centreville, VA; and youngest son Jeff of San Francisco, CA; seven grandchildren, and two great grandchildren. Graveside services will be held Friday, October 12, 2018, at 2:00pm at Sunset Lane Memorial Park, 1000 Bethel Avenue, located at the Mile Hill and Bethel Avenue roundabout in Port Orchard. A reception will follow afterwards at Rill Chapel, 1151 Mitchell Avenue, Port Orchard.

The family of William "Bill" Clyde Baker Jr. created this Life Tributes page to make it easy to share your memories.