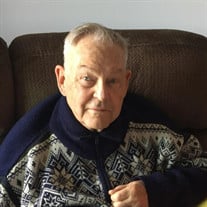 William “Bill” Swope passed away Thursday, Nov. 18th, 2021, in Silverdale, WA. He was a resident at The Ridge Memory Care when he passed. Born November 22nd, 1929, in Syracuse, NY, to William and Emma (Ludwig) Swope, Bill began his life-long passion for flying at an early age. His first flight in a plane was as a young boy, which inspired him to earn his solo license in 1945 (age 16), his private pilot’s license in 1950, and his private glider license in 1958. Bill earned an Aeronautical Engineering degree from Northrup Aeronautical Institute, followed by Bachelor’s and Master’s degrees from the University of Colorado. He had a long career in the aeronautical industry, working as an engineer at Cessna, Lockheed, Ryan, and eventually the Federal Aviation Administration, retiring from the FAA in 1995. After retiring, Bill and his wife moved to Apex Airfield in Silverdale, which allowed him to achieve a lifelong dream of living on an airfield with his plane in the backyard. During his lifetime Bill owned four planes and belonged to multiple associations such as the Experimental Aircraft Association, the Aircraft Owners and Pilots Association, along with numerous flying clubs. In 2012 Bill was awarded the Wright Brothers “Master Pilot” Award by the Federal Aviation Administration. Along with being an avid pilot, Bill was a devoted family man. In 1956 he married Evelyn “Evie” Beattie and soon after welcomed two children. The family of four relocated to Washington in 1973. He was a very caring parent who actively supported their activities, such as 4-H and high school sports. He even became a school bus driver so he could drive his kids’ teams to their events. He also loved spending time with his three grandchildren. Bill loved being part of a community and was a dedicated community servant. He was fortunate to find like-minded souls in the Lions Club, which he joined in 1975 and remained an active member for the rest of his life. He loved to help maintain the Clear Creek Trail and enjoyed many walks along it. Bill also served his country. He volunteered for the Air Force Reserve in 1950 and deployed to Korea as a Sergeant with the 452nd Light Bomber Wing during the Korean War. Bill is survived by his two children and three grandchildren: his daughter Linda Gray of Port Orchard, WA, along with her two daughters, Sarah Gray of Bremerton, WA and Stephanie (Gray) Shaw of Mountlake Terrace, WA; and his son Bill Swope with wife Paula and their son Jake of San Antonio, TX. Bill was preceded in death by his wife, Evelyn, his sister, Patricia (Swope) Lloyd, and his niece, Emma Lloyd. A memorial service will be held at a later date. In lieu of flowers, memorial donations can be made to the Alzheimer's Association.

The family of William "Bill" Alan Swope created this Life Tributes page to make it easy to share your memories.