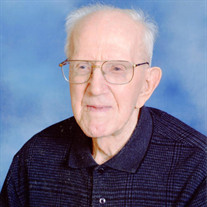 William Joseph Chaussee, Jr. Bill was born on January 16th, 1921 in Tacoma, Washington. He was the eldest son of William J. Chaussee Sr. and Helen Dorothy (Jensen). Bill grew up attending various schools in western Washington, graduating from West Seattle High School in 1939. He married the love of his life, Muriel L. Simons, on November 8, 1942. Muriel passed away November 13, 1998. Bill spent 20 months in Civilian Conservation Corp (CCC) in Quilcene, Washington. He worked Civil Service at Naval Ammunition Depot (NAD) Bremerton until enlistment in U.S. Navy on March 24, 1944. After his discharge, he worked as an auto mechanic at Ephrata, Washington and at Bangor NAD. In 1957, he worked at PSNS as a Machine Operator, retiring as a Machinist Supervisor on January 16th, 1976. Bill was active in the flying community working as a flight instructor on the evenings and weekends at the Port Orchard Airport. This enabled Bill to go on many cross-country trips (California, Minnesota, Reno, and Canada). He logged almost 4,000 hours of flight time. Muriel accompanied him on most of these trips. Life was good when he was in the left seat of his Republic Seabee Floatplane. He was an avid fresh and saltwater fishing enthusiast. He also enjoyed golfing and had at least 4 holes-in-one to be proud of. Bill was also a Masonic Temple member, rank of a Master Mason. After his retirement, Muriel and Bill enjoyed many warm winters in Arizona and Mexico with their Airstream trailer. Besides his wife Muriel, Bill was blessed with a son and daughter, Steven and Diane. Bill presently has a brother Ken (Port Gamble, Washington) and a sister Lois (Rio Vista, California), three grand children; Mark, Lisa and Laura, and four great-grand children and one great-great grandchild. Sister Jeanne, brother Bob and daughter Diane have passed away. There will be no services. Bill will be interred privately at Sunset Lane Memorial Park in Port Orchard, WA.

The family of William Joseph Chaussee Jr created this Life Tributes page to make it easy to share your memories.