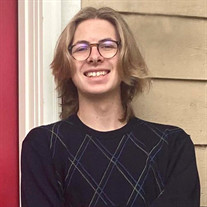 William David Huck, beloved son, brother, grandson, nephew, cousin, teammate and friend, was tragically taken from us on June 28, 2021. He was born July 12, 2003 to his parents Chuck and Kate in Edina, Minnesota. In the nine years that he lived in Minnesota he loved spending time at Birch Lake with his grandparents and playing every sport imaginable. During this time he also formed a lifetime love of the Green Bay Packers and developed his affinity for sports statistics and trivia. In 2013 Will moved with his family to Port Orchard, Washington and he finished his fourth grade year at Orchard Heights Elementary. He finished his elementary education at Manchester Elementary then went on to John Sedgwick Junior High. His love of sports continued in Washington where he played baseball with South Kitsap Eastern Little League, football with South Kitsap Pee Wees, and every sport he could with each school he attended. He began high school in 2017 at Vashon Island High School and graduated from there on June 12, 2021. Will received several scholarships and was accepted and excited to attend the University of New Hampshire in August 2021 to pursue a degree in sports journalism. Will spent hundreds of hours volunteering his time to youth in the community. He had a passion for kids and for all people. Even though young, he became an incredible server at Whiskey Gulch. Once again, impacting the lives of so many with his smile and playful attitude. Will considered his co-workers family, and loved each of them. Will made an impact on people in so many ways and his family is so proud of the love he showed so many. Will was a kid that was impossible not to love. He was incessantly cheerful, always helpful and had a wicked sense of humor. He had a strong faith in his creator, loved to listen to music on vinyl and was calm and kind of crazy at the same time. He may have been the best son and brother to have ever lived. Those left to miss him forever are his parents, Kate and Mike, Chuck and Cassie, his siblings Kenny, Kayley, Hallie, Skylar, and Madison, grandparents, aunts and uncles and many, many cousins.

William David Huck, beloved son, brother, grandson, nephew, cousin, teammate and friend, was tragically taken from us on June 28, 2021. He was born July 12, 2003 to his parents Chuck and Kate in Edina, Minnesota. In the nine years that he lived... View Obituary & Service Information

The family of William David Huck created this Life Tributes page to make it easy to share your memories.