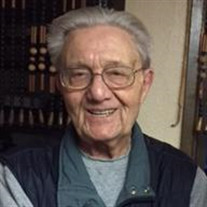 William (Bill) Francis Smith, III passed away on April 3, 2017 at his home in Port Orchard, Washington. A viewing is scheduled on Saturday, April 8, 2017 from 3:00 – 4:00pm at Rill’s Life Tribute Center in Port Orchard, WA. Graveside service will be at Tahoma National Cemetery on April, 24, 2017 at 2:00pm, with an informal gathering to remember and honor his life to follow. Bill’s lifetime was spent in service to others and to his country. He was the second of seven children born to William F. Smith, II and Thelma Virginia Smith (Johnson) on April 28, 1929. He lived in Parkersburg, until the age of 17 when he began his military service, enlisting in the U.S. Navy in May of 1946. In the Navy, he received training in underwater demolition at Little Creek, Virginia. After completing the training he was assigned to Underwater Demolition Team 4 based out of Little Creek, Virginia. He was discharged from the Navy in May of 1949. Bill also served in the U.S. Air force and the U.S. Army. His enlistment in the U.S. Air Force began in November of 1949 where he served briefly before joining the Army in 1951. He fought in the Korean War with the 1st Battalion, 223rd Infantry Regiment, 40th Infantry Division. In 1953 he received his first Bronze Star for meritorious service. Bill completed Airborne training in April of 1961 then attended the Special Warfare Center at Fort Bragg for training to join the U.S. Army Special Forces. Upon completion of training, he was assigned to Special Forces 1st Group in December 1961. In 1963 he received his second Bronze Star for meritorious service for leading a platoon of Laotian soldiers in the defense of a village and recovering two missing soldiers. Bill served three tours in Vietnam, earning his first purple heart in 1963 and his third bronze star in 1964. In 1967 he earned a silver star for successfully charging and disabling, without aid, an enemy machine gun emplacement that was pinning down a company of his men. During his attack he was wounded again, earning his second purple heart. Bill finished his third and final tour in Vietnam in 1970 and earned his fourth bronze medal. After retiring from the Army in 1973, Bill went to work as a sheet metal mechanic at North Island, San Diego. Then he moved the family north to Port Orchard, Washington where he continued his sheet metal trade at Puget Sound Naval Shipyard, working in Shop 17. He retired from the Shipyard in 1992. In retirement he became an active member of the Special Forces 1st Group Alumni Chapter located in the Puget Sound area and served at St. Gabriel’s Church, participating in the Knights of Columbus and as a Eucharistic Minister. He was a student of history, literature, and faith. He loved to learn and stayed very up to date late in his years. At one point he set out to tackle reading the entire Great Books Collection, as well as many historical texts in regards to the politics and warfare surrounding World War II. His most recent subject of interest was reading scripture interpretations from Catholic authors. Bill also loved the outdoors. One of his greatest adventures was a cross country road trip in 2009. Bill is survived by his wife, Hatsu, his four children, William, Anna, Patty, and Tom, eleven grandchildren, one great-grandchild, as well as his three brothers and two sisters James Ellis Smith, John Thomas Smith, Kenneth Paul Smith, Patricia Ann Kelley, and Mary Ellen Unger. He is preceded in death by his father, mother, and sister, Virginia.

The family of William Francis Smith created this Life Tributes page to make it easy to share your memories.